Posted at 14:41h in Meeting One Another by Jef Saunders 0 Comments
3 Likes

How did you meet anthroposophy? 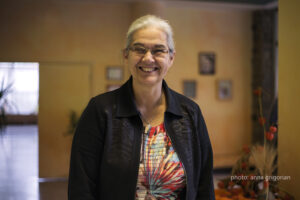 I was privileged in that respect; my mother, Huguette Chaurette, had become interested in what anthroposophy had to say about the education of the child. She had met Madeleine Simons, who wanted to open a Waldorf kindergarten. That is how Huguette discovered the works of Rudolf Steiner and became the first French-speaking anthroposophist in Quebec. Huguette would travel from Quebec City to Montreal (260 km) to attend the members’ meetings of the Anthroposophical Society. Huguette brought in guest speakers from Europe such as René Querido, Francis Edmunds, and Dr. Mees. Meeting these individuals touched me deeply. I was impressed by their erudition, their inner strength, their ongoing research, and their desire to fully understand things and to see them in a new light. When I reached the age of 18, my first moon node, I had a decisive experience. I had arrived at a threshold. It was as though my life no longer had meaning, and I had a deep felt need to change the direction of my existence. Huguette gave me books on Celtic mythology and Parsifal, and as I read Parsifal, I had the impression that I had found myself; I felt the urge to become actively involved in life’s practical matters and work towards bringing about change. I gave up attending college and took advantage of the opportunity I had to travel with friends. We visited Emerson College and its biodynamic farm, the Goetheanum and a Camphill village. In these centres, the staff and the students convinced me that an anthroposophical world outlook could be applied to concrete practical activity. I was on the right track. In 1970, I travelled to Winnipeg with Jacques, who was to become my husband and the father of our 4 children; there we worked with Dr. Grussendorf, a German biodynamic farmer. At a location about a hundred kilometres from Winnipeg, he had turned what was originally uncultivated land into a farm which was almost entirely self-sufficient. The farm had a magnificent vegetable garden, several greenhouses, wheat fields and various farm animals. Having thus acquired life skills and knowledge of biodynamic farming, when we returned to Quebec a year and a half later, it was clear that we had to make a change. The biodynamic method was amazing. In 1973, we attended Emerson College. Following our foundation year, Jacques chose to study biodynamic farming, and I took courses in spatial dynamics, painting, plant drawing and clay modeling. Upon returning to Montreal, we purchased land to take up biodynamic farming. In 1986, I joined the staff of the École Rudolf Steiner de Montréal, initially to teach gardening and plant drawing, and subsequently as class teacher and finally as administrator, a position I occupied until my retirement in 2021.

Why did you decide to become a member of the Anthroposophical Society?

In order to become a member, one has to have reached a stage of involvement and a sense of gratitude. The Society is the institution that finds its rightful place in the earthly sphere. I believed very sincerely in this new community, and felt that in order to be a part of it, it was necessary that I become a member.  I joined the First Class 10 years later. In taking this step, I agreed to be a representative of anthroposophy in the world, and this involved a commitment to furthering my personal spiritual development. It was not enough to receive; it was necessary that I also give back. My commitment was concentrated primarily on Waldorf education, study, research and personal meditative work. I have no words to express the wealth of all I have received. Anthroposophy has become my life’s nourishment. It lives in me thanks to the many conferences and workshops I have had the good fortune to attend, and thanks to the efforts I have made to incarnate this vision in my own life.