From the World Society

21 Dec From the World Society 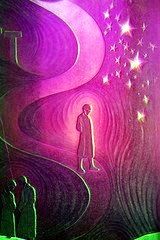 From the outset of his work, Rudolf Steiner asked those around him to observe their own soul experience in relationship to the spiritual teachings and guidance he was bringing. He asked for the development of an inner discernment for how what he was bringing was experienced.

He was pointing to what had always been the process for sharing spiritual knowledge – to convey these truths by word-of-mouth. He often returned to this principle, asking for inner clarity of the affect on our soul’s life when we hear spiritual truth conveyed orally, to perceive the activity in our souls as listeners. He asks that we develop a sense that living into the spoken word enables the engagement of our faculties of imagination not possible otherwise.

These two processes; listening with an open receptivity that allows for a direct affect on the inner constitution of the soul, and longing to grasp through reading and intellectual understanding, have accompanied his work ever since. Initially, he sought to attend to these polar relationships to his work by asking, again and again, that his request for this sensitive soul perception be strengthened.

As it became clear that the need to read and understand his work was growing, he asked that each publication of his public lectures include an introductory paragraph that explained the parameters for understanding and having an opinion about the published work. For many years this introductory page appeared at the front of all of the printed texts.

While this extensive dissemination of his many lecture cycles was taking place, he maintained the importance of conveying his esoteric work,’within the original Esoteric School and then within the School for Spiritual Science, following these principles of speaking and listening – from mouth to ear. This protection of oral communication also extended to the courses given to the physicians and to the priests, among others.

As the copyright protections for his esoteric work began to expire, the care of this work as he had intended became increasingly difficult. This provided the opportunity for those longing to have these texts of his esoteric work, to obtain them. For those who have faithfully attended to Rudolf Steiner’s requests, these changes are personally difficult. For others, these changes provide an opportunity that had not been available before.

As an initial step to maintain the responsibility felt by the Leadership of the School for Spiritual Science, the texts of the Class lessons were publish by the Goetheanum Press; first in German early in the 1990s followed by an English edition at the end of that decade

With the advent of the Internet, it no longer is possible to sustain the care of his esoteric work as originally intended. This has been a struggle for many who feel a deep sense of responsibility to Rudolf Sterne’s intentions. At the same time others feel the critical necessity to make public all of what Rudolf Steiner has brought, and fully support the publications and broad dissemination of his esoteric work.

For some time the Leadership of the School for Spiritual Science has sought to reconcile this seeming dichotomy. This has now led to the significant decision to re-pubish this work in a new edition.

With the proliferation of a variety of translations and edited versions of this important work, the Leadership of the School has felt the urgent need to provide the best possible publication of this most important of Rudolf Steiner’s later work. To accomplish this, they have worked with the Goetheanum Press to prepare the publication of a full  authorized text of all of this material. This publication will contain an updated English translation, along with the full text of the German lessons on facing pages, making it possible for those wanting to work with these texts to refer easily between the translation and the original German. Each volumes will include reproductions of the blackboard drawings, making it possible to follow the relationship between text and drawings. In addition, each volume will contain three translations of the mantras. One is a newly available translation, never published before, that seeks in English to come as close as possible to the rhythms and sound of the German original.

The publication consists of a set of three, hard cover volumes – printed to the same high  level of production standard used for all of the Goetheanum Press volumes of Rudolf Steiner’s work. The three volumes will be the standard size, and will match, all of the other GA publications.  In order to make this publication as accessible as possible, the Leadership of the School for Spiritual Science has sought support to underwrite the publication, and are continuing to do so. At this point the maximum cost of each set is 150 Swiss Francs. The intention is that as further support comes to this project, that this cost will reduce. In order to reduce shipping costs, the Anthroposophical Societies in Canada and the US, have agreed to receive pre-orders for these sets, which will then be sent in bulk to each country.

If you would like to take advantage of these savings please contact Jef Saunders, the Society’s administrator, directly.