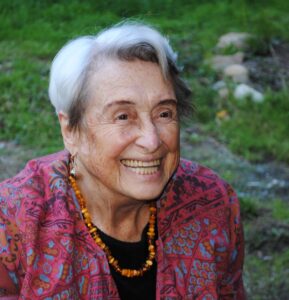 How did you meet Rudolf Steiner’s work?

Anthroposophy came with my mother’s milk and my father’s sunshine; I was surrounded with books by Steiner and Tomberg. My father could have met Steiner and was devastated that he didn’t, his friend, Dr. Karl Konig, also never met Rudolf Steiner.

As a teenager I was interested in Anthroposophy out of my own initiative.

At around age 17 I read the French version of Existentialism – which is very different than German Existentialism – the French have good questions but no answers. My father would say, “Like an onion you peel one layer after another, but you never find the centre.” Although I was steeped in Anthroposophy growing up, you could say that it was reading Existentialism and not finding answers that led me to Anthroposophy out of my own free will.

The main talent of Rudolf Steiner was that he radiated love and positivity, but he was also realistic. He always picked up on what was good in a person. Since offering classes on Rudolf Steiner’s biography, I now understand him in a broader context, as a person separate from his work in the world. He had a large circle of close friends. One can’t really know Steiner without learning about his significant friendships. I was also deeply influenced by Albert Schweitzer and Karl Konig who both also radiated love.

I knew that Anthroposophy was the right path for me, and became a Society member in Camphill, Scotland in 1957, at age 21. Also, at the age of 21 I decided to start a Camphill place in Vancouver and end my life there (this transformed into another Camphill in Duncan on Vancouver Island where I have lived since 1999). I decided this when I heard from Susanne Mueller Wiedeman, who worked under Ita Wegman in La Motta, say, “In Vancouver one can still heal, we should all pack our suitcases and go there”. My parents knew Ita Wegman because she had admitted them to the School of Spiritual Science. When Charles and I moved to the United States, we became members of the Society there, and in the 1980s once we were committed to staying in Canada, we joined the Anthroposophical Society in Canada.

Why is it important to be a member of the Society?

To support Anthroposophy in the world, I see Anthroposophy as one of the main pillars for mankind in our time and for the future.