Meeting One Another An Interview with John Bach, Beekeeper by Susan Koppersmith

20 Mar Meeting One Another An Interview with John Bach, Beekeeper by Susan Koppersmith

Posted at 14:36h in Meeting One Another by Jef Saunders 0 Comments
1 Like

Susan: John, the last time we saw you was at our 2020 Vancouver AGM, which was held online because of the 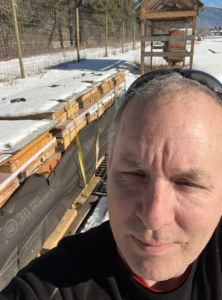 pandemic. You gave a lively Zoom presentation of your work with bees in Princeton, BC. How have things been going with your bees since then?

John: In the fall of that year I found myself in the midst of a crisis with my honeybees. Something was wrong in my hives and I didn’t know what the problem was. Beekeeping is a complicated business and if you get one thing wrong, you can lose your colonies.

By the end of November 2020, I had lost every bee! Their corpses were thin and scrawny — dried out. What was the matter? Was there not enough oxygen in the hives? Were their deaths the result of the Varroa mite? I didn’t know. In the fall honey gets mixed with pollen to make bee bread; this helps to grow and fatten up the bees to carry them into the winter. The bees should have received enough food, yet they were dead. What had gone wrong? In the past all my ways of keeping my bees healthy had worked. I looked at myself in the mirror and wondered if I should go on. Maybe continuing to work with bees was not in my karma anymore.

For 4 months in late 2020 and early 2021, I was in a very dark place. I found myself in front of a computer screen for hours looking at YouTube videos made by beekeepers about their techniques. These were not BD beekeepers but commercial ones. They can’t afford losses and a lot of what they do is right. Sometimes, I would watch a video three times in a row to look for clues.

Susan: Did you give up? Maybe you were meant to cut your losses and move on to something else?

John: Well, something inside made me hang in there and live with despair for 4 long months. A thought began to grow that the problem with my bees might be one of nutrition. Could the difficulty be with the pollen-run of the previous summer? Perhaps pollen had been lacking and the fall bees had not received enough protein in their diet. This would also affect the queen’s ability to lay eggs.

In the spring of 2021 I decided to give my work with bees one last try and I bought 10 colonies. I started feeding the bees protein supplements right away. I bought canola seed and had 3 different plantings throughout the season so that there would be plenty of pollen available, too.

Ten colonies grew eventually to 24; last summer my bees thrived! And the numbers this year have been the biggest they’ve ever been. It turns out my blind spot had been with nutrition. I had not been able to raise winter bees due to a pollen dearth. The old bees died and there were no winter bees to keep the colonies going.

I am now a much better beekeeper after my loss. I don’t necessarily accept that what worked in the past is going to work in the future. I am more awake to subtle changes with my bees. This might be the most important lesson I have learned.

By the way, with all the recent flooding in BC, I woke up one morning to find all my bees sitting in water! I thought that I had now another major catastrophe on my hands. I hastily put the colonies on higher ground and the water on my land eventually receded. Thankfully, no harm came to the bees.

Susan: I think your story is so interesting considering that the theme for the upcoming Perspectives 2022 is “From Grief to Action”. We are remembering the burning of the first Goetheanum and how Rudolf Steiner was able to inspire those around him to keep looking towards the future. He told them that if they could make use of despair and carry on with projects already planned, then what seemed at first a disastrous event would go on to become a blessing. It appears as if something similar has happened to you and your work with bees.

John, thank you for your time!