Meeting One Another CAROL LEWIS, London ON  by Corinna Sons

20 Mar Meeting One Another CAROL LEWIS, London ON  by Corinna Sons

Posted at 14:27h in ENews by Jef Saunders 0 Comments
6 Likes

I grew up in New Jersey and Pennsylvania in a Baptist home. My father was a minister, and I remember when I 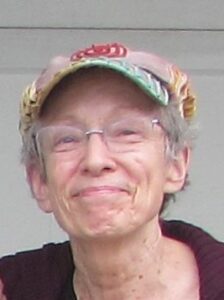 was in high school sitting with him in the car in the driveway and asking something like “Why do you believe in the Bible?  It doesn’t all make sense.” I expected him to give me some kind of “spiritual” answer, but instead he pointed out that people had used it to guide their lives in practical ways for centuries, and that was good enough for him. I found that answer unsatisfactory, and it confirmed my long-held belief, at the time, that I had been born into the wrong family.

Soon I went to a small liberal arts college in Michigan called Kalamazoo. Most of the students there knew each other, and in the first year, I had a habit of asking new acquaintances “What are you about?” or words to that effect.

One of the answers led to the gift of a copy of “Knowledge of Higher Worlds”. I tried to read it and found it difficult.  But I also found that because it was difficult, it was something I could respect. So I started going to youth conferences in Spring Valley, entranced by experiences of people sitting in circles on unusually carved chairs, wearing scarves, and discussing how Wagner had a notion of the spiritual world, and you could tell this from the chord progressions in “Parzival”.

Back at Kalamazoo, I went by Greyhound to monthly anthroposophical study groups at the Ann Arbor home of Dr. Ernst Katz, who with his wife Katie was more than kind, collecting me at the bus station, feeding me, and keeping me overnight. Someone in the study group, upon hearing that I was about to go to graduate school at Indiana University, said, “There is not one anthroposophist in the entire state of Indiana”. Still, I spent a week at the Goetheanum, experiencing the Faust performances and meeting many anthroposophists. I remember going out to eat with Alan Howard and his family and Helmut Krause and hearing that they would be going to Canada to start a Waldorf school in Toronto; I thought, very interesting, but nothing to do with me.

Fast forward nine years: I was now  part of the American diaspora living in Canada, in London, Ontario, married with one child and one on the way, and working with a group to start a Waldorf school. As part of that undertaking, a study group was formed, initially led by Dr. Kenneth McAlister, attending medical school in London at the time. There the group and the new teachers heard about the possibility and importance of joining the Anthroposophical Society, which a few of us did.  This led to attending a number of conferences, some of them inspiring, and some Annual General Meetings of the Society, some of them less than inspiring. It also led to my joining the School of Spiritual Science, which at the time meant driving to Toronto and back once a month and attending other conferences, some—unforgettably—led by Ernst Katz.

Today, I try to work in an ongoing way on what it means to be a member of the Society, to which Rudolf Steiner, in his anguish over the burning of the Goetheanum and the divisive behaviour of some of the Society’s members, attached his own karma at the re-founding of the Society at the Christmas Foundation Meeting in 1923. Anyone reading Rudolf Steiner’s biography could not fail to be moved by the sacrifice he made and by his devotion to making the ultimate effort for a new beginning.

At the same time, I have been saddened by the various rifts that have occurred of late amongst anthroposophists that have been painful and divisive. I have been heartened by the level-headed approach of many in their measured and compassionate views on the complex crises of our time. And I find most inspiration in the work of the “Dutch anthroposophists”—Zeylmans Van Emmichhoven, Bernhard Lievegoed, Coen Van Houten—to heal the rifts in the Society by their myriad practical efforts towards the social impulse and towards “doing the good”—“The truth can be known; the good can only be done.”  May we work together as a Society towards such goals.