Meeting One Another: Interview with Marguerite Doray, Montreal, QC

14 Dec Meeting One Another: Interview with Marguerite Doray, Montreal, QC

Posted at 15:34h in Meeting One Another by Jef Saunders 0 Comments
2 Likes 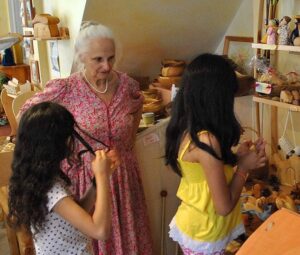 How did you meet anthroposophy?

In the 1970’s, inspired by the back-to-the-earth movement, I had moved from Montreal to the Beauce region of Quebec. It was a time of introspection and consciousness raising. Zabulon Dostie gave me a copy of Knowledge of Higher Worlds. I felt an immediate connection to what I read because it focussed on the qualities of freedom and autonomy in one’s spiritual development. I then went about reading a second book by Rudolf Steiner, The Spiritual Fundamentals of Education. I decided to travel to England to train as a Waldorf Teacher at Emerson College. When I returned to Quebec in 1980, I resumed my work as teacher in the village school.

Since I was the only trained Waldorf teacher in Quebec, Huguette Chaurette, of the fledgling  Rudolf Steiner School in Montreal, asked me to return to Montreal to take the first-grade class in September, 1981. At midnight, on Christmas eve, 1980, an image came to me, an image of a rose. The rose – a visible manifestation of Waldorf education; the rose I was being called upon to help create. And that is what compelled me to return to Montreal to teach at the Waldorf school.

During the 19 years I taught at the Rudolf Steiner School of Montreal, I always dreamed of a store where anthroposophically inspired products could be purchased – a boutique which would ideally be located on the ground floor of the school and would also serve as a symbol of the economic life that supports cultural initiatives. After many years of dreaming of this possibility, I realised that it would be up to me to make it happen.

It was at St. John’s tide in 2001 that La Grande Ourse was born – a Waldorf inspired toy store, not however located on the ground floor of the school but rather in downtown Montreal. At Christmas 2005, I became the owner of a commercial duplex located at 263 Duluth Street. The second floor of the duplex would serve as the headquarters for the Anthroposophical Society in Montreal, which was looking for new premises at the time. Thanks to personal loans made by friends from the anthroposophical and Waldorf communities, the project was able to come to fruition. The Society would use the upper floor, and I would make up for the monthly deficit by renting out the space for other cultural activities.

How did you come to decide to join the Anthroposophical Society?

During my teacher training in England, I had a conversation with Werner Glas, the renowned educator, who asked me about my connection to anthroposophy. My spontaneous answer was: “Completely devoted”. During a conversation concerning the Society and the First Class, he said that every Waldorf teacher should be a member of the General Anthroposophical Society and that after working for three years as a teacher, should become a member of the First Class. Which I did. Since that time, I have asked myself the question time and time again. Being a member means being a collaborator in forming the physical body we know as the General Anthroposophical Society. Through my work and my contributions to this goal, I collaborate in making the incarnation of the Spirit of Anthroposophy on the earthly plane a reality. Otherwise, this being remains entirely in the spirit realm. The next step, that of becoming a member of the First Class, allows me to better serve mankind.

La Grande Ourse is a place which affords me the opportunity to impart to others the knowledge of the child I have gained from Rudolf Steiner, from my colleagues, from the children themselves, and from my own daily efforts to put this knowledge into practice. Explaining the reasons why a toy is age appropriate is an excellent way of starting a conversation along these lines. These toys make visible the invisible pedagogical impulse I have always lived with. This is the metamorphosis of the rose; its essence already exists in the leaf but only becomes manifest when the blossom appears.

Now that I am 74 years old, I am hopeful that a successor will come along to carry this impulse forward.