Meeting One Another: John Vanden Heuvel Victoria, BC

14 Dec Meeting One Another: John Vanden Heuvel Victoria, BC 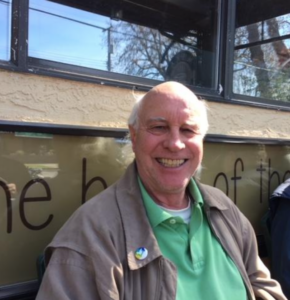 In 1971/1972 I travelled to Israel – from London (by motorcycle)  and ended up on Kibbutz Ein Gedi by the Dead Sea. Being there was the turning point of my life. How so ?

One of the many volunteers there was Dilnawaz Bana who had left India travelling with her sister Aban (who was on another kibbutz).

I sensed Dilnawaz was special – Zoroastrian background . . . they financed their travels by publicly performing mystic Indian dances.  We stayed in touch (via aerogram letters) and a year later, I was near Basel in Eastern Switzerland, as were the two Indian sisters.

An anthroposophical German woman had met the two and introduced them to Dornach and Anthroposophy.

So with an invitation, I visited them in Dornach. Upon meeting them in front of the Goetheanum, I asked, “What is this beautiful building.” Her response, “This is where East meets West”.

Their mentor and supporter Frau Spengler invited us for lunch, insisted on giving me ‘How to Attain Higher Worlds’ and ‘Philosophy of Freedom’. To make a wonderful journey short, upon reading those books, I learned German, enrolled in the Waldorf Teachers course, and attained an English teaching position at the St.Gallen Rudolf Steiner School, where I had an amazing enriching 8 years.

Dilnawaz and Aban (both took the Eurythmy and teacher courses, taught at the Lukas Klinik and various schools) and became deeply involved in the anthroposophical movement in Europe and initiated the founding of many Waldorf schools in India.

Back in Canada (1982)  and after a 5 year stint in Nova Scotia where we helped Anna Keefe start the Halifax school, our family ended up in Nelson where I was on the board of the Nelson Waldorf School. I founded WWOOF Canada and have always had one foot within the anthroposophical movement and bio dynamics !

I was fortunate enough to visit both sisters in their home village in 1999 in India with my daughter. My 3 children are Waldorf School graduates from Nelson, BC.

What a wonderful journey, filled with gratitude !