Posted at 18:31h in Meeting One Another by Jef Saunders 0 Comments
2 Likes 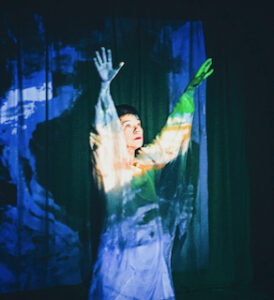 Speaking with Nina is a curious experience, for one finds that she was truly born an anthroposophist.  She began this life in Hamburg, Germany, with an English mother and a German father.  Her mother was an anthroposophist, but Nina believes that she, the daughter, in some sense brought her mother ‘back to’ anthroposophy.  The mother read Reincarnation and Karma just before Nina was born.  Nina indicated that as a young child she had an awareness of former lives, her own and perhaps those of others too.

Formally, she met anthroposophy at age seven.  She was taken by her mother to visit an elderly lady in Hamburg, a leader in the Society, who had a little apartment above Steiner House and the theatre there (a building purchased by the Society in the 1920s).  Their hostess emerged and peered over the banister to wave them up the stairs.  She was stooped and white-haired, and Nina imagined her as a ‘witch’. When they entered the living room, which was a wonder-world of many treasures such as amethyst caves, suddenly the ‘witch’ became an ‘angel’.  The mother was asked why Nina was not in the local Nienstedten Waldorf School.  She had been on a waiting list for some time.  A phone call was made, and space was found for her.

At thirteen Nina found herself drawn to the books on her mother’s shelf: Knowledge of Higher Worlds and its Attainment was the most appealing title, so she began there, followed at age fourteen by Karmic Relationships (for its ‘sensationalistic’ title).  At sixteen she joined the Society and received a letter from the Secretary informing her that she was then the youngest member in the world.  Why did she join then?  She had seen in a document of her mother’s – perhaps a newsletter of some kind – that when Steiner re-founded the Society, he made a point of signing each membership card himself, as he wanted to express thereby his karmic connection with each person.  Nina realised that she wanted to declare her karmic bond with Dr. Steiner.

I asked Nina, given that her classmates were interested in typical teenager activities, obsession with pop stars, movie actors etc., whether she ever felt lonely.  In some ways yes, she said, given that when she joined a reading group at 16, those closest in age to her were in their late 60s.  But she indicated that she had never felt spiritually alone.

Nina’s family eventually relocated to Botton Village, a Camphill Community in the UK, and Nina became a class teacher there in her late teens and, over time, a mother of four.  In her thirties she trained as a eurythmist, after going through a challenging illness process.  Having taught for many years in both capacities in Canada (and for a few years in South Africa), and working as a distance mentor for the Foundation Studies program offered by Rudolf Steiner College in Toronto (a task she still fulfils), Nina became in 2013 the founding teacher of Auriel Eurythmy (Canada), and led a small (and part-time) group of mature adults through to an informal graduation in 2018.  By then she had consolidated a connection with Mexico (where she had originally been invited to teach in 2013), such that a modular training there became possible, one that has now developed to a full-time training based in Mexico City and involving colleagues from numerous countries.  In summer 2022 Auriel Eurythmy (Mexico) – certified now by the Goetheanum – will graduate thirteen eurythmists – including two Canadians. There are also committed students coming along in first, second and third years.

As a former student of Nina’s I asked her about her task, which she sees as furthering eurythmy to make it an integral part of contemporary culture; to train eurythmists who are both good artists and good teachers.  Playing devil’s advocate, I then wondered aloud: ‘Why does this matter?’  Nina responded with an anecdote:  One year when Rudolf Steiner was giving a sequence of lectures at the Goetheanum, there were eurythmy performances offered each day before his lectures began.  It was noticed that only a handful of people were attending the eurythmy segment, and many more arriving afterwards for the lecture.  Dr. Steiner instructed the security guard to lock the doors once the eurythmy had begun, and not to unlock them until the lecture was finished.  He then made a comment to the effect that those who didn’t appreciate the eurythmy would in any case not understand anthroposophy.

Nina indicated that she has always felt aligned to the Manichean stream, where art and spirituality are harmoniously integrated.  In her view, when one works with eurythmy, these dimensions cannot be separated.