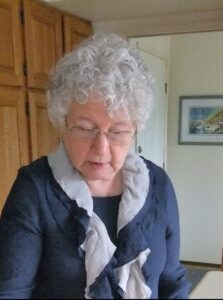 Once upon a time, a very long time ago, I met a classmate at nursing school in London, England whose education had been very different from mine. I was fascinated and learnt about Waldorf education for the first time. Fast forward 21 years, I was married and living in Canada, and I was determined to be a Waldorf teacher, but I couldn’t leave my family to go to Detroit or Sacramento. Neither did I want to waste time with Anthroposophy – who needs that? Werner Glas firmly put me right on that and no, training by correspondence was not an option. A few years went by. Family circumstances changed, financial help was forthcoming, and I was able to join the 1985 class at Rudolf Steiner College, moving to Sacramento with my two daughters able to attend the Sacramento Waldorf School.

With a Quaker background and having had neighbours whose daughter was in the Moonies, I was watchful. This Anthroposophy, whatever that was, was it a cult? Yet what I was learning had the ring of truth for me and I found it not only fascinating, but it also confirmed and explained my own thinking and how I had raised my children. I explored The Christian Community and, somewhat to my surprise, attended The Consecration of Man regularly. The Teacher Training year expanded on the Foundation Year, and I joined the Anthroposophical Society.

Returning to Canada, I joined the Waldorf school I had founded in a small village in the mountains of BC, full of zeal and enthusiasm. Anthroposophy was basically unknown; I was in the wilderness. Much as I wanted to join the School of Spiritual Science, living so far from Vancouver it just was not practical. The wilderness phase lasted 7 years as I taught in Waldorf schools, most of which were not well established and were unsteady.

Life sent me back to Rudolf Steiner College, a new marriage, another teaching position, dramatic surgery, the Goethean Studies Program with Dennis Klocek, and then employment at the College as Campus Manager and later as Administrator in the Teacher Education Department. Now, I could join the First Class, return to The Christian Community, participate in the Faust Branch. 14 years later I was faced with examining my future as a Canadian in America – a situation that could not continue indefinitely. The opportunity arose to join the West Coast Institute for Studies in Anthroposophy in BC as Administrator – the answer to my wondering.

Those 14 years were rich and satisfying. I had access to the First Class and The Christian Community although they required a somewhat lengthy journey and expensive ferry ride. I taught part time and then served as Board President for the local Waldorf school and joined the small study group.

Over recent years I have found that Anthroposophy has changed for me. There are times when I’m deeply involved and then times when it lays to rest. I have recently retired to Kenya, have a loose association with the Rudolf Steiner School, Mbagathi, the ‘mother school’ of East Africa, and am acutely aware there is no branch of the Society, no First Class, no Christian Community. I have time now to study more yet have no impulse to do so; this may change.

Now, I harvest the fruit of it and focus on living it. Life will direct me further as it always has.