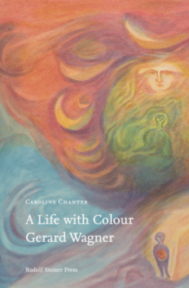 Members of the Anthroposophical Society in Canada may be interested in a new biography of the painter and anthroposophist Gerard Wagner.

Gerard Wagner came to the Goetheanum in 1926, intending to stay for a week before moving on the France for a painting sojourn. However, he was so impressed by what he experienced during his short visit that he decided to stay and make his life in Dornach.  We learn, through him, of the happenings and mood at the Goetheanum in those early years soon after Rudolf Steiner’s death, and follow his path to the Goetheaum Painting School where he studied under the guidance the German painter Henni Geck.

His own development as a painter followed a rare path of inner striving founded on Rudolf Steiner ‘s indications for a new art of painting. He was intent on discovering what Rudolf Steiner meant by ‘painting out of the colour’.  His teaching began in earnest in the 1950s, and with the help of his former pupil and later wife Elisabeth Wagner-Koch, a school was founded in the 1960s which attracted students worldwide, a large number from English-speaking countries. At what became known as the “Wagner School” Gerard Wagner was able to pass on his knowledge to many searching young people, especially during the heyday of the school in the 1970s and early 1980s.

The latter part of the book reveals Wagner’s artistic intentions and how he was as teacher of painting. It also describes various aspects of Rudolf Steiner’s indications that Gerard Wagner taught and, of course, included in his own work, such as the two-dimensional picture plane, weightless colour, the importance of the medium of watercolour, and other subjects.

Events and developments in Wagner’s life are related often through memories of colleagues and former pupils, not to mention letters including those written by Gerard Wagner himself. In this respect there is a wealth of previously unpublished material and translated into English, which gives insight into this remarkable individuality and the great contribution he made towards an understanding of a new art of painting.