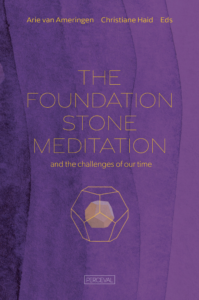 Thank you to the Vancouver group for sharing, in the E News of April 2022, their work and experience with the Foundation Stone of the Christmas Conference 1923-24, and for inviting us to do so.

In Quebec, many people, as elsewhere, recite and meditate on the text of the Meditation as such and/or the daily rhythms in an individual way.

As for a group or shared work: The recitation of the Meditation of the Foundation Stone is often part of the anthroposophical events, the life of the branches, the festival gatherings, etc.

Arie van Ameringen, besides having initiated and edited the book, The Foundation Stone and the Challenges of our Time, Perceval editions, has organized in the past decade some events to further deepen the importance of this priceless gift of Rudolf Steiner.

In 2017, Diane Huguette Beauséjour (pioneer of anthroposophy in the Eastern Townships) asked me to prepare with her some meetings towards the 100th anniversary of the Christmas Conference 1923-24. As we are 230 kilometers away from each other, we exchanged by phone or in person at each other’s home for a few days, as much as possible. In 2019, we invited Arie to join our planning as well as Carol Meyer, astrosophist.

The group of four finally had an extended meeting on March 13 and 14, 2020, in Montreal. We faced then the beginning of the health restrictions. About 15 participants continued the work, each at home, but in together, until Pentecost 2020. The organizers then met in a park or at Arie’s house to prepare a gathering during the Holy Nights.

It could only take place in the Laurentian region, north of Montreal, with two of the four organizers, because we were forbidden to leave our respective regions.

Nevertheless, a meeting ‘miraculously’ took place in the fall of 2021 at the Rudolf Steiner School of Montreal, and another one during the Holy Nights 2021, in a private home. We are planning a meeting on May 29, 2022 in the atmosphere of Pentecost, again at the R.S. School in Montreal.

Each event put forward the three aspects of the Foundation Stone: the etheric stone itself and its laying in the heart of each person, the Meditation, and the seven Rhythms, with more emphasis on one or the other aspect depending on the meeting. Each time we added eurythmy, a complementary artistic activity: modeling, drawing… a meditative moment and very important exchanges.

An anthroposophical group in Cowansville, south of Montreal, has been studying Prokofieff’s book: The Encounter with Evil and the Victory Over It through the Science of the Spirit for some time. The Foundation Stone of Good, which will also support our May 2022 meeting. A study group in the Laurentians is also looking into it.

The eurythmists of Ensemble Interval are working regularly on the Foundation Stone Meditation in eurythmy, hoping to present it in 2023 or 24.

Alongside with this process towards the 100th anniversary of the Christmas Conference, Chantal Lapointe and I organized meetings called FOR CHILDREN, with the Foundation Stone as a basis to examine our responsibility for the next generation in the current context. Eight meetings of seven to fifteen persons were held in less than two years.

I would also like to mention an essay on an ‘Easter Play’ that I wrote ten years ago, the structure of which is based on the Meditation of the Foundation Stone with Recalling, Sensing- presence, Beholding, Christ-Sun. The text refers mainly to the fifth Gospel, the book: From Jesus to Christ and the Easter Imagination.

The play had been presented three times before the current health measures came into effect; it was offered again, solo, three times around Easter 2022. I will gladly send it (in English, the translation will need adjustments) to anyone interested. It is a humble essay that you can simply read or perform with a group, modified and improved.

May we grow together through the current events by standing firm in the face of dehumanizing forces, thanks to the Spirit of the Foundation Stone.