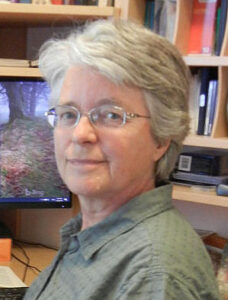 In her beautiful backyard in London ON, Agnes Schneeberg hands me a dark blue book, hand-bound in linen and leather, the ivory-coloured pages smooth to the touch. It is part of the Chadwick Library Edition of Selected Written Works by Rudolf Steiner. For this exquisite series – with the editorial board consisting of Christopher Bamford, Michael Arlen Davis, Thomas O’Keefe, and Julia and Peter Selg – Agnes was entrusted with a new translation of “An Outline of Occult/Esoteric Science”. It took her almost four years to complete this deeply researched and supremely readable translation which comes in three volumes – and with a new title!

Q: Agnes, tell me a little bit about yourself, what is your background?

A: I was born in Holland, went to a Waldorf School, and early on discovered my passion for languages. When I came to Canada at age 23, I studied German and classical Greek at York University but never turned this into a profession. I earned my living as a piano technician, tuning and rebuilding pianos. I also made furniture and wooden toys.

Q: How did you get into translating?

A: In the mid-nineties I participated in several anthroposophical retreats with Ernst Katz in Ann Arbor; he mentioned a book he had written, but not yet published, in Dutch about the evolution of morality in relation to the Ten Commandments. When he died in 2009, I took on the job of translating and editing this book. I had no official background in translating, but to prepare myself I made a thorough study of grammar and of punctuation in American English. This resulted in the book The Ten Commandments in Evolution, published by SteinerBooks in 2016.

Q: How did you come to be asked to produce a new translation of “Occult Science”?

A: This was a direct result of my work on the above-mentioned book. When the editorial director of the Chadwick Library Edition was looking for people to do new translations of several basic books by Rudolf Steiner, my name was mentioned.

Q: How would you distinguish your translation from others?

A: There have been various approaches over the years. The older translations generally used “man” and “he” where Steiner referred to the human being. In the nineties, the approach changed. In an effort to be gender-neutral, references to the individual were replaced with references to the collective whole – by using plural forms of the verb and, for example, “they” or “we” instead of “he.” I have attempted to find a balance between these two approaches, by using “he or she” in more specific instances, but also “he” for general references to “the human being,” as well as plural forms where it seemed appropriate to be all-inclusive – always trying to be true to Rudolf Steiner while making it accessible to the modern English reader. Any modern translation also has to deal with the fact that certain words can no longer be used in the same way.

Q: What were the challenges?

A: There were many! Apart from the general challenges of finding English terms for German words that are almost impossible to translate, there was – to mention just one example – the problem of the title. I struggled with the discrepancy that seemed to exist, even in German, between the title and the content of the book which, as Steiner explains in his final preface, contains “the whole of anthroposophy.” And yet the literal translation of the title is “Secret Science”– the term Steiner also used in earlier books and lectures (translated as “Occult” or “Esoteric” Science in previous translations of this book). Several people involved with this Chadwick edition felt that the time was right to change the English title to “Spiritual Science” and the book contains notes explaining this decision. We came to the agreement that the new title better reflects the contents of the book, and I hope that the readers will also see this as a positive change.

Q: What did you enjoy about translating this particular book?

A: I was happy to be given the opportunity to translate “Occult Science” because it became a continuation of my work on Ernst Katz’s book, in which he correlates the Ten Commandments to the great evolutionary phases described in Chapter 4 of “Occult Science.”

Q: What are you taking away from these four years?

A: Translation is a learning process through the years. It is challenging but also rewarding to struggle with each sentence, and to do justice to all the nuances in the best possible way. After having done different things in my life, translating this – my favorite – book by Rudolf Steiner was more than I ever hoped to be able to do.

Q: Do you have any plans for future translations?

A: There have been requests but after almost 11 years of continuous translation work, I need a proper break before embarking on new projects.

For more information on the above-mentioned books, please follow these links: