From the World Society: On Seeking Truth

14 Dec From the World Society: On Seeking Truth 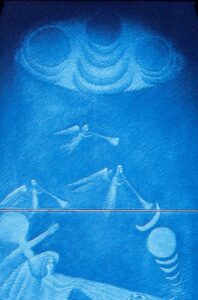 For millennia one of humanity’s most cherished endeavours has been to understand the mysteries of the world. We long to find our way into what works from beyond the sense visible, informing our lives together – to seek truth.

This search has changed along with humanity’s growth and development. In recent years, and especially over the past year, this fundamental soul process has come under attack. The quest for the true, a way once clearly discernible, has become shrouded, lost, disoriented. This loss can be sensed but is difficult to elaborate or understand.

As one of the first to take up this great endeavour, Gilgamesh reveals how loss and grief in the death of his beloved Eabani, becomes the impetus for his search for the incomprehensible truth of death. Not willing to accept what comes as an answer from his contemporaries, he resolves to seek comprehension for himself. This is the significant beginning of this quest for true understanding. To experience what is true cannot be conveyed by others. We must go into the unknown, into the regions of ‘death’ beyond our sense experience, and only then can come close to a direct experience of the realities that affect our lives.

This cultivation of the individual’s capacities to seek for truth is at the heart of classical Greece. All that flowers in the academies, all that is drawn out of the world beyond the senses, becomes the foundations of mathematics and medicine, astronomy and geometry. The cultivation of knowledge is firmly founded on the quest for archetypal truths that have their direct effects in Greek society. These archetypal laws are seen as the truths upon which not only the sciences can be established, but are the authentic foundations for human relationships. Truth could inform the very structure of language, Grammatica, and elevate human discourse, Dialectica. The lonely individual way taken by Gilgamesh is now cultivated between those seeking knowledge. This is a significant shift where this search for truth remains a uniquely individual journey, but one that can be carried by a ‘community of seekers’.

This great human aspiration, to reflect in earthly knowledge and relationships super-earthly divine truths, was not only the foundation of classical Greek society but brought with it expectations and responsibilities. Finding one’s way to the Academy and cultivating the rigour of ‘truth seeking’ was expected of citizens. This was the ground upon which their culture was to stand.

As the phenomena of religious institutions began to arise, these communities of seekers came under threat. Increasingly belief systems placed intermediaries between the individual and the path followed to a direct, personal, recognition of truth. The academies of Greece were closed and the communities of those who would continue came under increasing threat. The skills of individual reflection and learning, reading and writing, were tightly controlled, and discourse was seen as heretical outside of prescribed circumstances. These were significant hindrances placed in the path of those who would come to truth. Belief became the framework within which this great human longing was confined. With this confinement came an ever-increasing sense that archetypal truth, universal divine principles true for all people, did not exist. Increasingly those principles that were to guide humanity to ethical lives were seen as subjective. Belief systems circumvented the universality of truth. This became the justification for unethical and immoral treatment of those outside ones belief community. The quest for universal archetypal principles had been subsumed by earthly systems intended to control knowledge seeking. The individual seeker was a fundamental danger and threat to the power and control of these earthly institutions.

With the growth of sciences based on material concepts and principles, the severance of the individual from this deep soul longing for truth only intensified. Truth now was defined only by what could be discerned in the activity of material processes and laws – the ‘laws of nature’. This definition of reality, based solely on the sense perceptible, has so insinuated itself into our human experience that the search for divine presence and non-material principles at work behind outer manifestation has become the new heresy. This deep and profound rejection of anything beyond the sense visible has been woven into our soul life. At a profound level we have lost this innate inner sense for an orientation to the precious and sacred core of our being, our essential being, the divine reality within our ‘self’, for it is this ‘self’ that seeks its home in the Spheres of Truth.

This active alienation of the human soul and spirit from its true home has accelerated at an alarming rate. We now dwell in a human condition that no longer sees that this quest for truth leads us to universal principles that can guide us all. The intuitive sense that once these truths wake up in us we have the possibility of acting in accord with them, is under direct attack. What has been a self evident human endeavour for millennia is now seen as a fundamental threat to the institutions and systems we live within.

Science, materialistic science, establishes itself on the creation of hypotheses. Based on observable phenomena, a theory is developed to explain what can be observed, specifically excluding anything that is beyond sense perception. With the hypothesis established, the ‘scientific method’ then develops the tests needed to prove or disprove the hypothesis. What is significant is that this whole ‘scientific’ search for proof occurs within a closed system, the sense world. This methodology has become so embedded in our perception of reality that it seems self evident that it is the only ‘correct’ basis for any inquiry. Irrespective of the particular subject in question, we begin by establishing an answer first, positing a hypothesis, and then set about seeking for the ‘facts’, the ‘truths’ that prove the originating assumptions. We have divorced ourselves from the process of ‘truth seeking’, of entering into the deep exploration of the unknown, searching for the not yet known truths behind the extraordinary complex world conditions we are living within.

Our ability to grasp all of the multiple facets of a particular issue, especially when they are changing at an accelerating pace, creates extreme anxiety. The space for quiet reflection has almost disappeared. In an effort to find an orientation in this chaos, we seek for communities of ‘pseudo-seekers’. We no longer have the inner resources to enter into true inquiry and dialogue. To protect ourselves we have become extremely careful about whom we interact with.  It has become crucial that we eliminate from dialogue those who might not support the hypothesis we have come to accept as true.

Simultaneously, there is an ever growing need for an ‘authority’ to ‘rationalize the complexity’ for us. Religious and materialistic scientific authority has taught us that it is not possible for us as individuals to find truth within the complexities of our lives. We have come to accept that it is only the authority of a belief system that can provide us with a sense of safety. Conspiracies, dark hypotheses, proffer their phantom illusions of ‘truth’.

This same seeking for authority has had a profound effect on our anthroposophical movement in the past year. In the incomprehensible complexity of issues we are facing, we have turned to those within our movement with expectations of authoritative  declarations. We long for an anthroposophical authority to relieve us of the heavy responsibility of our own struggle for knowledge. This has placed the leadership of the Society and Sections under immense pressure, pressure that runs contrary to what we are called to do. Ever and again, Rudolf Steiner challenges us to take responsibility for our own truth seeking. He accompanies us; a companion. He indicates. He calls us to attend, to pay attention, then leaves us completely free to integrate his indications for ourselves – to seek truth. It is only then that we begin to build the ground for moral and ethical action.

We are in the time during the cycle of the year when outer darkness envelopes us. We are in loss; of the withdrawing of that which sustains us – the Light. Within this increasing darkness, our souls are stirred by the immediacy of Promise. The forces of accelerating disintegration would conceal this Advent; this Becoming. Yet, in the deep stillness, in anticipation, we know the presence of the coming Light.

We come together; we chose before birth to come together, as communities in Light. We are deeply connected with one another. Seeing through pre-birth revelations into this incarnation, we came into life seeking communities that support the sacred quest to our true humanity. Let us recognize and affirm these intentions. Let us receive and acknowledge the gifts we have come to give from across birth’s threshold. In so doing we find again the strength that brings us back to the path toward truth that, through incarnations, we have cultivated together.