Posted at 15:52h in News by Jef Saunders 0 Comments
0 Likes
I wanted to share with the membership some personal reflections of a recent Council retreat.
This January the Council with our General Secretary visited Calgary for a retreat and also to meet active members. Landing at the airport on a Thursday in a cold, snowy landscape was a bit of a shock because I had been enjoying almost spring-like temperatures in Vancouver, where I live. 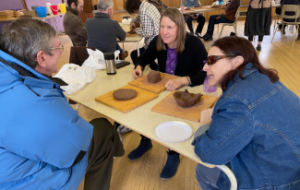 Christof Wuerscher met me and I was whisked away to his house where his wife, Christine, was getting ready for visitors. Later the other Council members joined us for a fine dinner with food that Calgary friends had provided. In the evening we met with local members, including a few who had travelled from Edmonton, several hours away. We introduced ourselves and shared news of initiatives in our areas. It was freezing cold outside but, inside the Wuerscher’s home that night, there was laughter and warmth.
The next day the Council met at Mike Galbraith’s house for a full day of meetings. We took over his dining room with its long wooden table. We discovered that Mike has many talents and one of them is cooking. He plied us with quiche, soup and salad and loaves and cookies during our lunch and break times, everything made from scratch.
As a Council, we try to meet in person three times a year. It is an expense to be sure in this huge country of ours for the Society to fly Council members to be together but it would be an impossible job if we couldn’t meet in person. We do have monthly Zoom meetings but we all agree that we interact more deeply when we meet face-to-face and more gets decided.
While in Calgary we discussed many things. One key issue was the Administration. Jef Saunders has retired from being the membership administrator, though he continues his work as editor of the eNews. He also works actively with Christine Tansley, his replacement. The Council is taking a year to envision how the administrator job might change. Christine had agreed to take on the task in the interim but she has asked us to be looking actively for her replacement. Can we imagine the role of the administrator in a new way? When this is done would we advertise for this position in the newspapers? Could our new administrator live outside of Toronto? Should we hire an ad hoc professional development officer to help with initiatives? We are keeping an open mind with these questions at the moment.
Here are a few items we discussed (there were more): issues around our new logo, our new publication (Perspectives), our website (we are thinking of refreshing it), the funding of initiatives (can we strike a balance between those at the centre of our meditative work and those initiatives at the periphery of our practical working together), our plans for celebrating the 100th anniversary of the re-founding of the Anthroposophical Society in 1923/24, our plans for the next AGM (to be held in Vancouver with the theme: the second panel of the Foundation Stone Meditation), the writing of short articles for Anthroposophy Worldwide and who will do this, news about a Latin Language conference in Dornach (a Canadian contact is needed), the Treasurer’s letter (going out in the next little while) and mandate groups (their scope of activity). John also reported on the work of the worldwide Treasurers’ Circle which met recently in November In England. This Circle has come up with Nine Points which it wants each of the country societies to consider and perhaps agree to adopt as the Circle strives financially to support the important work carried out at the Goetheanum.
A highlight of the weekend for me was the clay workshop on Saturday led by Jef on healing our wounds. The workshop was also open to any local members who wanted to attend.
Jef Saunders is a graduate of both the Arscura Art for Life and Life as Art – Biography Studies programs and he has 25 years of experience both in psychodynamic and anthroposophical therapeutic work. Now as a co-director of Arscura, he carries particular responsibility for the Core Studies program parts, in which he also teaches.
Jef started by mentioning that he had woken up that morning and decided that the title of the workshop should be instead, “The Wonder of Wounds” which was an intriguing title to consider.
My first thought was that because wounds come from trauma, would it not be important to find healing and then move on as quickly as possible to a bigger life? Or is it possible to think of wounds in a new way? Could they be thought of as “wonderful” in the same way that one would linger over the wonder and beauty of a landscape? Jef also explained the two directions that one can move to create development after being wounded: the direction of loosening (Luciferic) or the direction of contracting (Ahrimanic).
We were randomly divided into groups of three; each person was given a lump of clay and asked to think about an incident where there had been a wounding. Each moulded a “gesture” of his wound in clay, giving afterwards a brief description of the wound. We were told not to share emotional stories of the hurt and trauma but to characterize the experience objectively.
I shared with the group that my wound had been a physical one in which a part was “scooped out” of a whole.
Next, the other two members of my group were given another lump of clay with the instructions to work further with my wound — one person was to take the gesture more in the loosening direction and the other more in the contracting direction.

I found myself watching very carefully how each of them did this and, in a healing way, I was lifted out of the pain of my own personal “wounded” experience and into the sense-world. This I experienced as “freeing.” We then repeated this process for each member of the triad.

We were next given the opportunity to find something new in our original modelled wound out of how we had observed our group members work with it. Some extra clay was provided should we need it. I decided with this last shaping that I would take the gesture of my wound more in the direction of loosening, the “Luciferic.”
At the closing we stood around a table; each of us took a few moments to consider where best to place our “redeemed wound” relative to those of the others, revealing a picture of where we stand in the community.
Thank you, Jef, for sharing with us a novel and inspired way to work artistically together!
Later that night we were hosted by Class members in a private room at a local restaurant. There was some time after our meal for us to share some conversation and answer questions.
The next morning, a Sunday, in the kindergarten of the beautiful Calgary Waldorf School, John Glanzer led us with the 18th Class lesson. Afterwards, the Council headed back to John’s house for a hearty lunch prepared by Margaret Glanzer; there was also time for further conversation before we travelled back to the airport.
A big thanks to those who hosted us in Calgary and provided meals including the Glanzers, the Galbraiths, the Wuerschers and Sanda Stafie.
I had hoped to return home to mild temperatures but I arrived back in Vancouver to bleak weather and a snowstorm that shut down the city for days. But I had fond memories of the hospitality of our Calgary friends that warmed my heart and will continue to do so.
Susan Koppersmith
Secretary and BC Council Rep.