Reflections on Reading ‘The Secret Stream’ 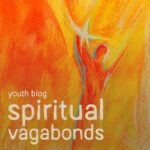 My relationship with Anthroposophy is deepened by my feeling for the books themselves. A year ago, I started working at an Anthroposophical bookstore, where I began to develop a relationship to each of the books that I have flipped through, straightened on the shelf, sold to a customer, and come to treasure like a precious gift. Sometimes, books are like beings, who have a life of their own. They appear to you when you need them. You open them up, and they show you the exact answer to a question you carried. While I was studying literature in university, I experienced how each book I read spoke to me and transformed me by endowing me with insights and inner strength to grapple with the complexities and challenges of the human experience. My faith in the law of how the right books appear to you at the right time has led to immeasurable discoveries and revelations. 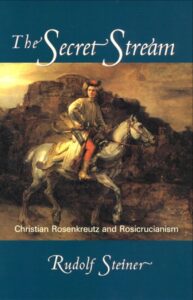 Not long ago I became intrigued by the books on Christian Rosenkreutz and Rosicrucianism. The mere name appeared so mysterious and intimidating, yet intriguing that it became irresistible to want to know what they were all about. As my interest in them continued to build, one day I found a hand full of books on Rosicrucianism displayed in the bookstore. Out of all the books, I picked up The Secret Stream by Rudolf Steiner, edited by Christopher Bamford. The cover looked very familiar. I remembered seeing this painting, ‘The Polish Rider’ by Rembrandt, displayed everywhere in the anthroposophical community where I grew up. Only in recent years did I learn that anthroposophists loved this painting, for this rider represented the ideal of a human being mastering one’s desires, as symbolized by the horse. Furthermore, Steiner identified the Polish rider as an image of Christian Rosenkreutz. A friend of mine pointed out that in the distance on the hill, one can even see a building resembling the Goetheanum.

The Rosicrucian practice is essentially a method of initiation, to awaken the forces within the human being and transform the human being to become an instrument through which knowledge of the higher world can be attained (pg. 43). Several lectures in the book describe the stages of training for a Rosicrucian. As with many of Steiner lecture cycles, he went to different places and gave the same talks. Each presentation contained new insights or added details that cannot be glossed over, even though the overall structure may seem repetitive. Reading a new lecture on the same talk helped refresh my memory of the previous lecture, as through I was reviewing what I had read the day before. To further consolidate my learning, I tried to articulate the best expressions of each stage of Rosicrucian training.

The seven stages of training appeared to be very attainable, in that any human being who is set upon seeking higher knowledge could work towards these stages. Time and time again, Steiner suggests that the Rosicrucian path is the most suitable for the modern human being of the era of the consciousness soul.

As someone who engages with Anthroposophy as a personal spiritual practice, I found that these seven stages are presented as a compact and descriptive framework of the real day to day work of inner development. For example, reading any of Steiner lectures is form of study to exercise one’s clarity in thinking. When we observe the subtle expressions of fellow human beings and the changes of the seasons, we activate our imagination to perceive the richness of the inner life in others and unfolding secrets of nature. Meditating on the zodiac and planet signs, or the Mercury staff, one begins to learn the esoteric script. These are just a few of my guesses of what can be considered relevant to the Rosicrucian path.

Reading selections of The Secret Stream confirmed to me the importance of being responsible for one’s study as an esoteric student. I always associated reading and writing as an activity of learning and thinking within a university setting, where I was essentially trained to maximize my reading input and writing output under stress and tight timelines. After completing my undergraduate studies in philosophy and literature, where I was so immersed in reading and writing, I felt that reading and writing became only a leisure activity that I had to actively pursue, for it had no central place in my work life and even in my anthroposophical communities. In some ways, the lack of cognitive activities depressed me and left me feeling like an incomplete person. However, when I started reading and writing again, I found that such activities led me to be a more fulfilled individual with self-awareness who could think and articulate one’s own ideas. There was something deeply human about engaging with this form of self-expression.

Writing is essentially to give birth to ideas. If reading means to take in what is outside of us, then writing becomes a process of transforming what we have taken in into something new.

In some way, reading and writing correspond to the seven learning processes and Rosicrucian stages of training, in that you begin with taking something outside of you, breaking it down within you, integrating it as part of you, and lastly reproducing something anew. The process of destruction and creation is a beautiful cycle of life. Paying attention and noticing these processes in different aspects around us is always such a miraculous sight